Home » How to Draw Ghost Rider 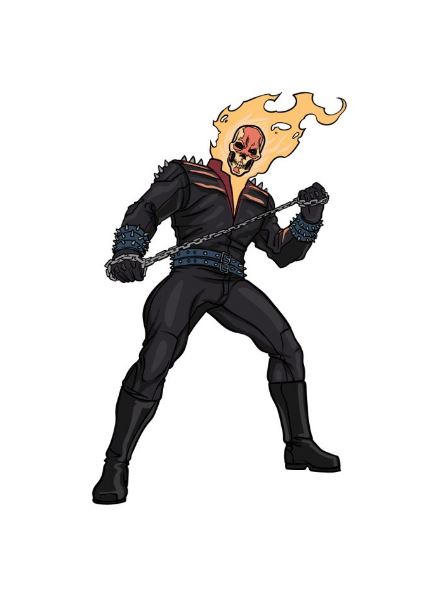 There are lots of memorable characters from comic book history, but of all these heroes and villains, Ghost Rider has to be one of the most unique!

This anti-hero has a flaming skull instead of a head and rides his flaming motorbike while chasing down his enemies.

This amazing design and complex backstory have made him a popular character, and by learning to draw Ghost Rider, many fans can create some amazing pieces of art with him. If you also praise this unique character, you will love the guide we have for you!

How to Draw Ghost Rider

For the first step of our guide on drawing Ghost Rider, let’s start with his most recognizable feature: his flaming skull head.

For this step, you might want to enlarge our example image exactly as we have some intricate details in the skull part of his design.

His eye sockets also have little circles inside for the eye effect that we’ll color in later. Once you’ve replicated the skull, you can use wavy lines for the flames around its head.

We’ll start by designing his iconic leather biker jacket for this second part of your Ghost Rider drawing. We use rounded lines that connect directly to the flames around the head to draw the collar and the beginning of the jacket.

We’ll then use straight lines to extend his shoulders, and then we’ll start with the sleeve of his jacket. You can complete this step by adding small spikes on the back to make it look even prettier!

In this step of our Ghost Rider drawing guide, you can now draw more arms and chests. You can extend your arm to the left and then draw the first part of his chest using straight and slightly curved lines.

The other arm will be curved, which means we’ll use many more curved lines to create the folds in the jacket sleeve. Several spikes around his forearm, and his fist will clench into a chain.

You’ve drawn a hand and forearm for your Ghost Rider drawing, and we’ll add the others in this next step.

This forearm will have spikes leading into a closed fist like the other. He will also be holding a chain in this hand, and we will add more details to this chain in the next step.

This next step of our guide on drawing Ghost Riders may require patience, but it will be worth it! We have already drawn his hands holding the chains, and in this part, we show the length of the chain between his hands.

This may require some patience because the various connections need to be pulled. So let’s finish this step by drawing the two belts she wears. He must have a thing for spikes because there are some on his belts too!

We’ll finish your Ghost Rider drawing by drawing his legs in this step and the next. Now we draw the left leg.

Your biker pants are tight, so let’s use smooth, curved lines to design this first leg. So finally, we will draw her boot on the lower leg.

In this seventh step of our guide on drawing Ghost Rider, you will finish by drawing the other leg. This will look similar to the first one, except at a slightly different angle.

After drawing both legs, draw any background details and additional characters you want for this image!

In this final step of your Ghost Rider drawing, you can complete it by adding some eye-catching colors. There is some color contrast to this character as most of her dress is dark black, but then she has the vibrant yellows and oranges of her flaming head.

We also incorporated some orange into her dress to show off the fire reflected there. We colored his eye sockets black and then used orange for the dots inside for a cool look.

One way to colorize it would be to use a more solid medium, e.g., colored markers for his dress and watercolors for the flames to make them appear softer.

Your Ghost Rider Drawing is Finished!